We had great fun during our Wyrt & Hazel Moon workshop at Plot 22 earlier in the month when some of us used flexible hazel stems to make symbolic fish to take home.  In this way we remind ourselves to be open to greater flexibility, our own intuition, creative inspiration and exhilarating experiences.  This hands-on activity also helped us to connect with hazel prior to drum journeying.  We travelled up into our innate higher wisdom and received some beautiful insights to share and  ponder after the workshop. 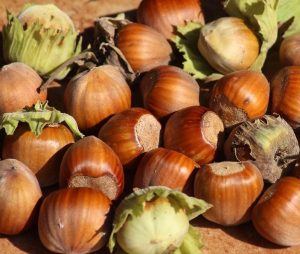 Hazel nuts and salmon are both great brain food – full of oils, protein, minerals and other goodness.  In druidic lore, the salmon is the oldest and wisest animal, even carved on ancient Pictish stones to reflect its importance.  Salmon returns from the oceans to its birthplace, often with great difficulty, to mate and release its young, metaphorically reminding us to rework our lives, revisit our consciousness by looking back to our beginnings, to our childhood or spiritual origin. 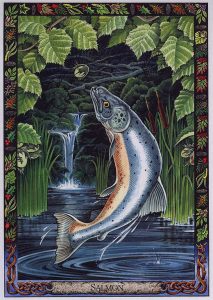 Many stories tell of sacred wells, wells of wisdom at the source of all life, around which nine Hazel trees, the tree of wisdom, food of the gods grew.  The Salmon that lived in the dark pools ate them with bright spots appearing along their bodies according to the number of nuts they had eaten.    This rendered them a prize catch gifted with shape-shifting powers and infinite wisdom.  One of many legends tells of a druid that had been seeking the great Salmon of Wisdom for many years to eat and thereby know everything that was happening in Ireland.  He eventually caught it and gave it to his apprentice to cook, warning him not to eat its flesh.  While cooking the fish though, a splash of the boiling salmon juice burned his thumb which he sucked without thinking. 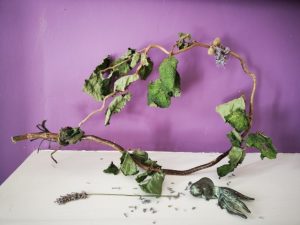 So it was the young man who received the salmon’s wisdom.  The old poet realised that he had misunderstood the prophecies and accepted his relegation with good grace while the young boy went on to be a great man.  The moral of this story may be that to gain wisdom or knowledge we need not strive to gain it head-on, that wisdom comes unexpectedly to the innocent and humble rather than to those in charge, preoccupied with the search.  That youthfulness of spirit and rejuvenation are vital for the truly wise. That an attitude of openness and innocence is more fruitful than strong-headed determination. 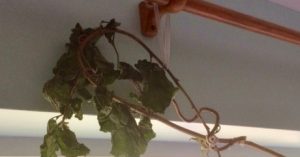 Serendipitously,  there has been a beautiful posting about salmon wisdom in the life of a mature woman on the OBOD website and I attach the link below.   I love her realisation that we can surrender to the current beneath the current to go where we need to be.  The perfect tension between the path of least resistance and the path of the will.  The path to Love.

Click here to read Roselle Angwin’s blog on the website of the Order of Bards, Ovates & Druids.

I would also like to give credit to the Druid Animal Oracle by Philip & Stephanie Carr-Gomm and Bill Worthington for some of the information and the salmon picture above.

Join our community of Forest Moon Sisters around the world!

You'll receive a warm forest moon hug from me once a month to help you feel and live your best. I know how you feel and help is here, friend.